Rooting on Android and Jailbreaking on iOS are two ways to extend device functionality and customizability. For example, you can install custom themes and gain access to the phone’s filesystem, which would otherwise be inaccessible. While both rooting and jailbreaking are similar, there are some big differences. Jailbreaking is a way to remove limitations imposed on the device by the manufacturer, while rooting is gaining access to the administrator privileges on a phone.

Jailbreaking often allows more for customization, but it doesn’t have as much functionality as rooting. Jailbreaks are also based on exploits that require you to be on a specific version of iOS* and a certain model of the iPhone. An app called Cydia is an alternate app store for jailbroken devices that allows for various tweaks and themes to be installed. Due to the locked down nature of iOS, many features can be unlocked through this method and you can make your device unique and more functional. Using jailbreaks however has been very controversial and was recently made legal in 2015.

*Currently as of iOS 10, there is a jailbreak availble for all 64 bit devices (iPhone 5S and later) 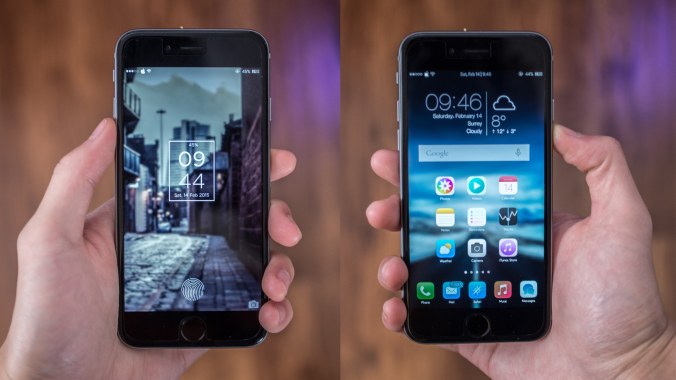 Rooting and bootloader unlocks on Android allows you to have full control over anything on your phone. It is the equivalent of being the root user on a Linux system, which grants you lots of power. With root, it is possible to mess with system applications and change low level parts of the operating system, such as the boot animation and kernel. Bootloader unlocking is a process that allows you to replace the OS loaded on the phone by the manufacturer with another version of Android or a few other operating systems. Some of these roms include Firefox OS, Ubuntu Touch, CyanogenMod, Slimrom, Purenexus, Sense, Touchwiz, and MIUI. By installing a custom recovery, you can flash kernels, radios, roms, all directly to the phones internal hidden partitions. Apps such as cSploit, Network Spoofer, and Titanium Backup are all root apps that can access system files. This allows for them to function as advertised, for penetration testing and backups of all user data. The process of rooting is different from device to device, but Google’s developer devices such as the Nexus line and its successor, the Pixel/Pixel XL make rooting and unlocking very easy. 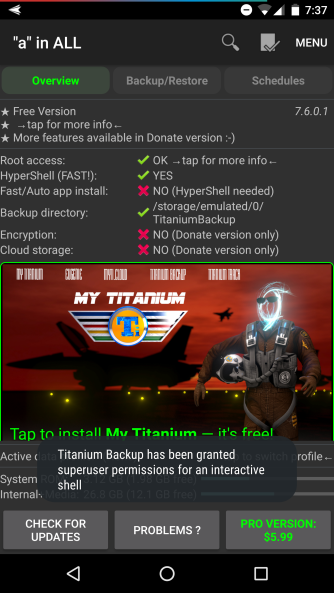 As you can see, both of these methods of gaining full access of your device can be very effective, and can make a boring, old device feel new and exciting. With jailbreaks you can make your device look the way you want, and with root, you can install roms and kernels to speed up your phone and increase battery life by a large margin. You need to pick which operating system suits you better….more customization or more functionality?

Mac addresses are a “unique identifier assigned to network interfaces for communications at the data link layer of a network segment”. They are similar to IP addresses on a local network, but are never changed. It is comprised of 12 letters/numbers that are hard coded into the network interface card, or NIC. Using software however, it is possible to give the NIC a temporary address to emulate. This can trick the network you are on to treat your computer as a different device.

Mac addresses have many uses, such as filtering on a private network. The network will only allow mac addresses on predefined list to connect. Another use would be to track a device’s movement when it passes by a Wi-Fi network. Many airports and public Wi-Fi networks also offer promos such as 30 minutes of free Wi-Fi. They track time based on your mac address, and blacklist it after you hit the time limit. By spoofing, you can reuse the promo multiple times, theoretically giving you unlimited wifi time.

Changing your mac address also has various uses, such as for privacy and to bypass any restrictions such as limited Wi-Fi time. This is often known by the term “spoofing” and can also be used for malicious purposes to steal packets and information on networks.

To change your mac address on Windows, you need to check your Network Adapter Properties and enter your desired address. 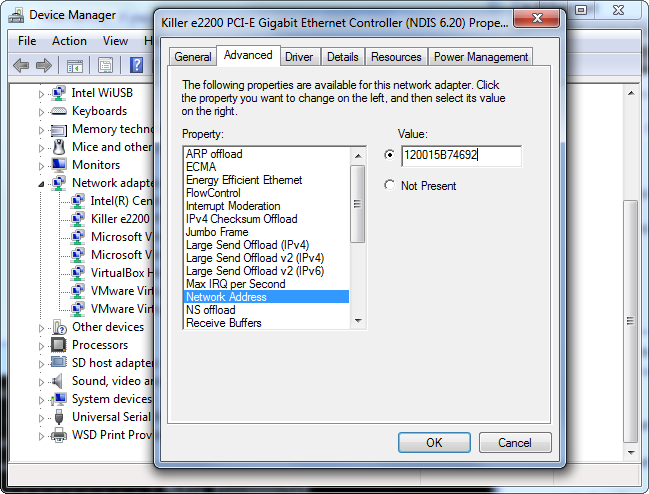 For OS X, you need to use the Terminal and enter a command, replacing en0 with your interface of choice and the mac being the one you want to spoof to.

On Android, you need root installed to change the address, which is different for every phone. An app like Macchanger can use root and BusyBox to change it for you.

By randomizing your mac address, you can avoid tracking on public wifi networks as well as trick them into believing you are a different device. You should always use a VPN in conjunction with random mac address, so no one can intercept your sensitive data.

Burp Suite is a tool for security testing on web applications, and can exploit or uncover certain vulnerabilities. It does this by setting up a proxy between you and the internet. It intercepts all requests and listens on the port for any requests to forward.

To set it up, you need Firefox and the Burp Suite application, which is available here. You first need to open Firefox and click Options > Advanced > Network > Settings. It should then give you options to configure the local Burp Suite proxy. 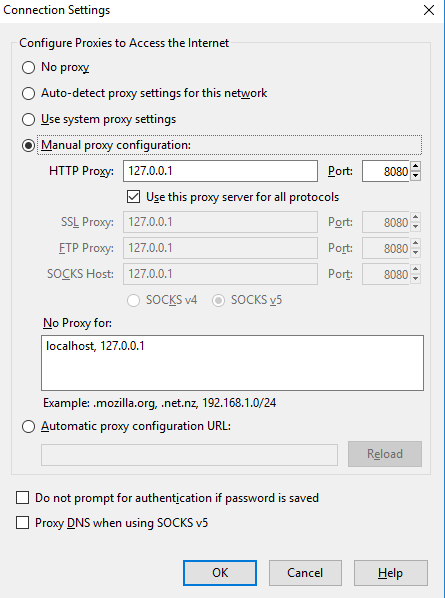 Once your settings look the same as this, click OK and then proceed to install Burp Suite and open up the program. You will be greeted with the option to select a temporary project or to create a new one. You can choose either one, but if your just playing around, then temporary is ideal. Once you choose which one you want, you will see many tabs that have various functions.

Go to Firefox and navigate to a website of your choice. You will see that the proxy tab lights up and gives you information. You can then drop or forward the request. If you click forward, then you will be connected to the website.

If you go to a website with a login form, you can try to brute force it with various combinations. You can click the intruder tab once you intercept from the desired login page. Then, you can choose a host address and port number.

You would then set the attack positions to be the username and password fields. After this you would define dictionary lists for the payloads 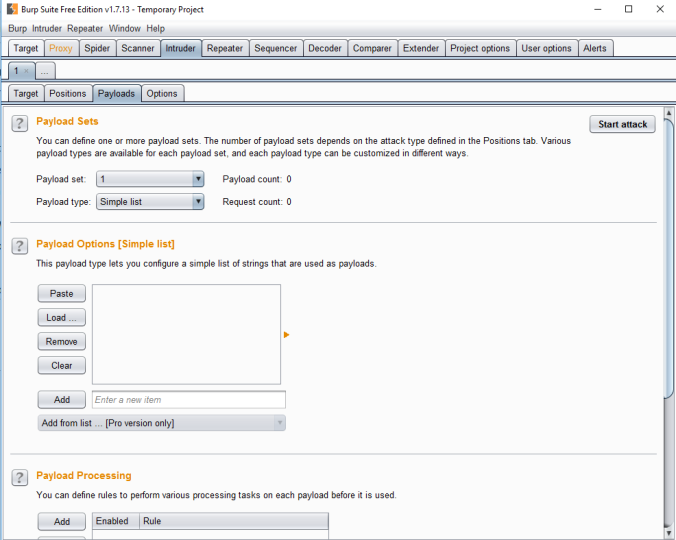 Finally, you would add items to the list in order to be brute forced. This can be done in the form of a dictionary list. 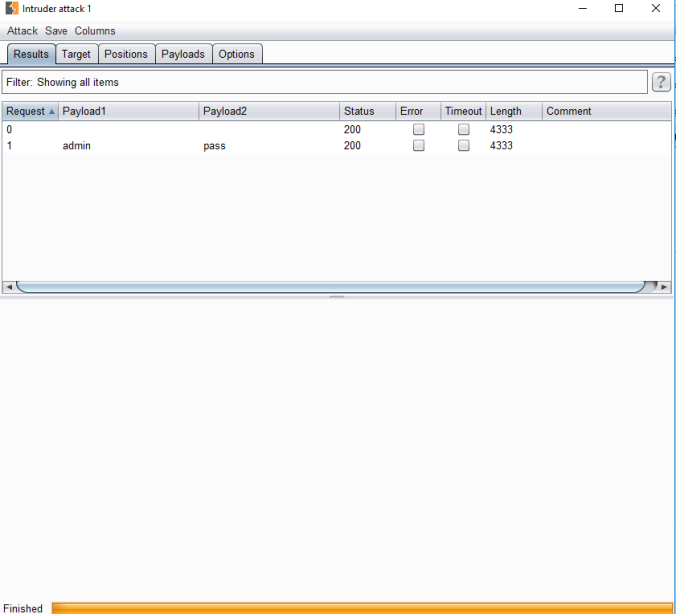 You can do this with many different combinations, and the correct one will have a slightly different status code, such as 200 for all except one, which is 210. The 210 one would be the correct credentials for that site.

These are just some of the basics in Burp Suite and it has much more advanced functionality you can take advantage of.

DDoS attacks are a type of Denial of Service attacks which is usually caused by many different compromised systems that flood a websites bandwidth or resources. This is often known as a botnet, and can be controlled by malicious hackers to take down big servers or web services. Many large companies often use services such as CloudFlare, which helps prevent against DDoS attacks by filtering all the traffic and only forwarding legitimate users to the site. Many of these services often face extended periods of downtime. This eventually leads to loss of revenue and more business for their competitor.

The tools used to perform these attacks are widely availible on the internet. Only one person running these attacks would only work on smaller websites and individuals, but you would need a lot more computers to take a website like Google down. Some tools are LOIC, HOIC, hping and Slowloris.

GUI for LOIC, an application that sends massive amounts of HTTP/TCP/UDP traffic to a website.

Many hacker groups, such as “Anonymous” use these tools in order to show their impact on the world and take down content and sites they don’t like. Many government sites are subjected to these types of attacks often as well. Companies are often given bad reputations for these outages and it paints a negative image in consumer minds.

As this map shows, on any given day there are attacks on many websites that occur all throughout the world. Services that prevent these attacks often have huge data centers, capable of staying online under huge loads, such as 400 gbps. Big sites without this sort of protection are very vulnerable and they should look into it.

Overall, DDoS attacks are very easy to do on a small scale, but with botnets and more computing power, the attacks can get very strong and do a lot of damage. These attacks may also be used to cover up smaller, more complicated data breaches.